This is the second part to my trip to Jeju Island! Click here for part one!

Click the link if you want my planned itinerary. Or if you're interested to know my estimated costs. Remember, we did not follow the exact route planned as the trip should be open to new ideas and developments!

We set off early in the morning towards Mt. Hallasan and stopped midway at this mysterious road somewhere between our hostel and Mt. Hallasan. The Jeju Mysterious Road, also known as Dokkaebi Road, lies on a hill at the foot of a mountain, and connects two major highways on Jeju-do Island. It has earned its name, as objects and liquid appear to roll and flow up the hill instead of down, when, in fact, such image of gravity defiance is an optical illusion rendered by the seemingly high surroundings.


We parked aside and we literally saw public buses and tour buses rolling up the hill with their engine off and once they reached the peak of the slope, the engine roars to life, and got me standing there with my mouth wide open. We decided to try it ourselves! We put our car into neutral, offed the engine and let it roll itself up the slope! I personally don't think it's anything mysterious, but just an optical illusion (or not..?). It was fun nonetheless to visit this road.

Part of the trail goes through forests/trees and it's very shady, and the other half are plains (no shelter). Part of the terrain is built on wooden steps, planks, and bridges. The other part would be natural terrain with dirt, rocks, stones and grass.

Remember to wear proper shoes (no sandals or slippers please!) because of the rocks and stones. I wore my regular Puma Shoes and when I land on the rocks, I could feel them poking my feet. So it wasn't very pleasant. You'll perspire when you start to climb, it will be hot as the sun is scorching down on you, so remember to bring enough water and a towel. However, when you get to the top, the wind is cooling and when it blows against your soaking wet shirt.... & that, Ladies and Gentleman, was how I caught a cold and fell terribly sick! If you can, bring a light jacket or a windbreaker! It's not very heavy at all!

There were a lot of aunties and uncles who were climbing and they climbed faster than I did! That totally put me to sham with how unfit I was am!

After our hike and a short break down from Hallasan, we visited the Teddy Bear Museum! Inside the two galleries you can view the teddy bears from various countries. You can also enjoy yourself at the museum shop, café, restaurant or the outdoor park where you can view the spectacular Jungmun Sea. The gallery is grouped into three sections: the History Hall, the Art Hall and the Project Exhibition Hall.

When we went, there were a lot of screaming school girls who I presume were exclaiming how adorable the bears are. It was very crowded when I went (I think it was the Korean School Holidays or something) and I didn't get to enjoy very much. If you enjoy and appreciate museums and bears, you should go here. I've heard that Jeju's Teddy Bear Museum is better than Seoul's. Well, I've never went to Seoul's so I can't really compare! If you've please do let me know!

Be prepared to climb! After climbing Mt. Hallasan, I was totally GONE!

There are 3 falls altogether. The first fall only takes place after a heavy rainfall (so if it's bright and sunny, there's no waterfall at all), the 2nd is always there, and the 3rd's rather short. If you're tired, just go to the 2nd waterfall and that's that.

For us fools, we went to the 3rd first. Realized it was a short one, we proceeded to the first, and there's no waterfall, though the scenery was beautiful nonetheless. & after all that climbing and walking, we finally ended up at the 2nd waterfall. Please don't be a fool like us, read the signage before proceeding! My friends were all fit and healthy, and my legs were on the brink of collapsing.

It seems similar to the wet markets in Singapore. Vendors sells fresh fruits, vegetables (a stall was selling lettuce as big as my head!) and meat. As you walk along the market, there're random food stalls selling rice cakes and Kimchi! 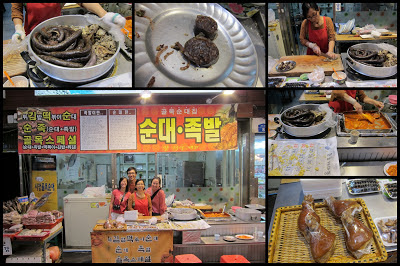 We sat outside one and bought Rice Cakes and pork innards which consists of Korean Sausage (I think it's pork intestines stuffed with rice noodles and other spices), pork liver and stomach. The Ajumma was so nice and friendly, even though we could not speak the same language. She let us try the Korean sausage first before we bought it, and when she realized Sock doesn't eat anything we've ordered, she chopped up some pork knuckle for her to try!


There wasn't anything after this place (or the next day), because I fell terribly ill and I didn't do anything except go back and shower, sleep and wait for my afternoon flight to Seoul.

Check out my posts to other parts of South Korea here: