TIP: Taxis Around the World!

The easiest, most convenient and no-brainer way of travelling around a city is always by taxi. Obviously, if you have lots of things to carry, or if it's late, you'd want to catch a taxi to your hotel ASAP. However, in some cities, taking a taxi could actually burn a hole in your pocket!

No doubt taxis are a convenient way of getting around the city, most travelers might fear the costs one might incur just by hitching a ride in... let's say, metropolitan Japan or even Singapore!

One way to really find out is by using this faboulous website: http://www.taxifarefinder.com/ 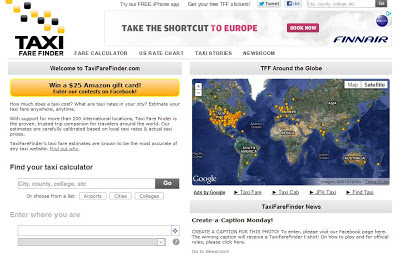 This website helps calculate the fare based on the destination's taxi meter regulations. 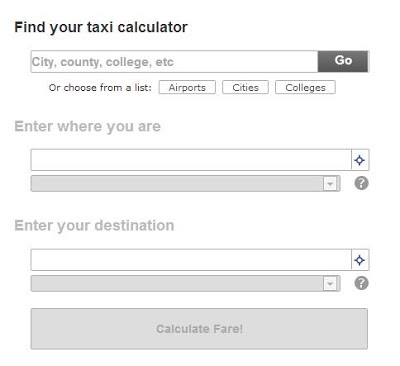 You just need to find the city you're looking for, plot your location and your destination and you're able to have a really good estimate of the fare!

Before I did my exchange in Las Vegas, I was desperately searching for alternatives to get to the University from the Airport. I thought I had struck gold when I chanced upon this website! I was able to weigh my options more thoroughly. 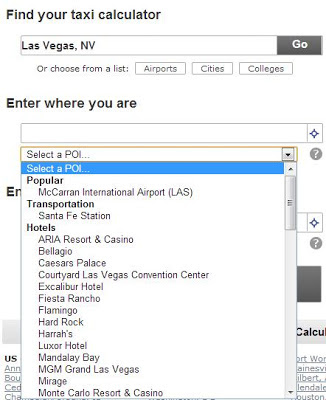 The website allows you to choose from a list of Places of Interests (POI) which eliminates the time you have to go searching for the exact address of prominent landmarks or hotels in the vicinity. 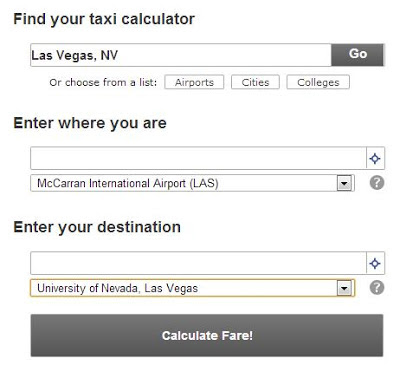 And my estimated taxi fare is US$15.40! It is a norm to tip the cab drivers about 10-20% of the metered fare, and it's even calculated into the fare! This is so amazing! Not only does this website calculate the fares, surcharges, and tips for you, it even shows you the best route to go, the rough breakdown of the fare, estimated distance and time and even the estimated cost with light or heavy traffic! 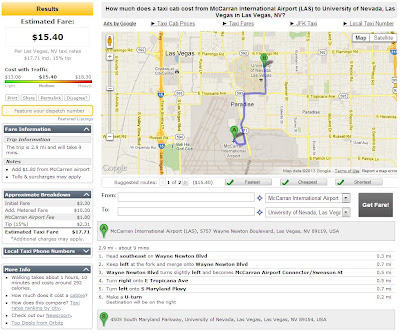 In the end when I arrived in Las Vegas, we bumped into more of our peers and all of us just rented a mini bus to bring us into school. It was the cheaper alternative as we had about 18 people! Each of us paid around US$8 including tips.

Now, lets find out the estimated fare of the ever expensive Japan! I've heard stories of travelers who did not do proper research and had no choice but to catch a taxi as they've missed the last train. & I've also heard my friend recount how she missed the last train and she had to walk back for 2 hours back to her hotel as she refused to take a taxi. 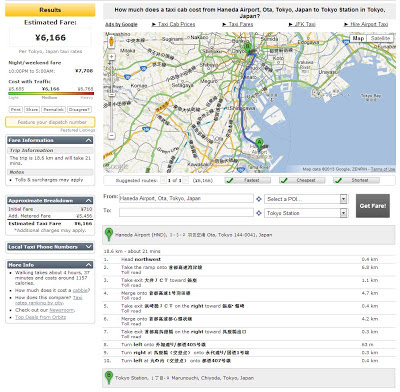 So it will cost about 6,166Yen to get from Haneda Airport to downtown Tokyo Metro Station, bearing in mind that Haneda is very close to the City Center. That is roughly US$64.18 for a 20 mins ride. To me, that's an absurd price. It gets worst if you arrive in Narita Airport and taking a taxi to downtown Tokyo, it'll cost you about US$250!!!

What's amazing about this website is that it even add in all the crazy surcharges and government tax into the fare, depending on the destination. Take for example, Singapore. We have an additional Peak Hour surcharge (30%) during certain time of a weekday, and a midnight surcharge (50%) for taxi rides after midnight, surcharges for picking up at the Airport or Casinos downtown, and even ERP, which is government tax (or more like electronic toll) imposed on all motorist and operated only during certain timings of the day. It's so complicated sometimes, even for a Singaporean like me.

So, an average taxi ride from Singapore Changi Airport to our bustling shopping district of Orchard Road will cost you..... 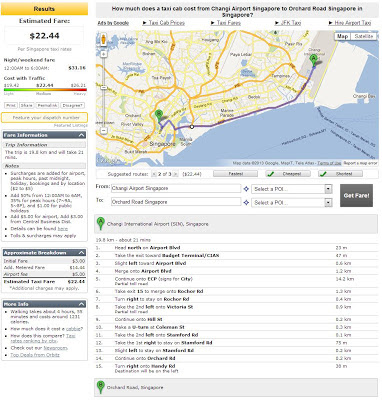